The game is really cool. The idea is very interesting and the principles of making the environnement move only when the player moves works very well with the concept. The design of the ennemies is also very cool for a jam. I could really see myself playing this game if it had more content. I also think that it would benefit to have more roguelike aspects.

Also i don't know if it's intended but it feels like running trought rooms until you find the ladder and just dodging ennemies is the better strategie, but i don't think it is the best way to experience the game and encourage the player to not use the main concept of the game, so i think the gameplay should prevent the player from using it. Maybe by making the ennemies drop more items, a boss every floor or a key system.

In a nutshell very good idea and good implementation of it. Could be a really good roguelike if developed !

Thanks a lot for the good feedback, it’s amazing to hear that somebody went into depth to come up with such details!

The thing about not being able to deal enough damage because of how ingredients are distributed is definitely true. I briefly went over it here, how it may also be a good thing to not always have damage available, since if you do it becomes pretty straight-forward to just sit still and kill everything.

I definitely really like your idea about adding a boss/key system. I am only afraid that making it mandatory could soft-lock players since ingredients are finite. I could remove rare recipe drops from chests and make them a guaranteed boss drop to incentivize killing them, but then that would have to stop at level 15. It could also be that 8 ingredients (with 512 combinations) is too much when you can only make 15 potions, could be that the main issues would be automatically fixed if I reduce that, allowing the player to just craft more things at any given time.

You are totally right there should be less ingredients or more potions.

For the softlock part maybe the boss could drop some ingredient when you hit him and some ingredients could spawn around him (Like a worms boss which have horms getting out of the rock around him.) but the boss will need to be agressive in this phases so that the player can't exploit too much those drops.

The game is great. Love the idea. There is just one thing:

You didn't give a collision to the wallpiece that has that green stuff coming out of it.

Thanks a lot, nice catch!

I pushed a fix now, should be up in a few minutes :)

good job with the game, it is really fun! 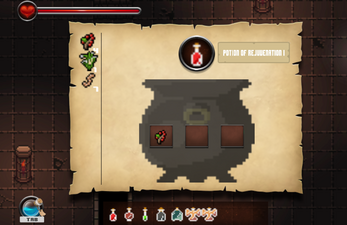 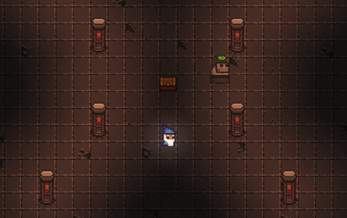 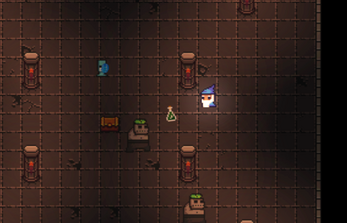